I’m giving away everything

Posted on November 12, 2012 by iwillmeetmadonna

My campaign is about to finish…until meet her. In the meantime, I’m still giving away my CDs, DVDs, memorabilia that I was assembling in the last years… Am I getting crazy? I must say in 100% that not, maybe addicted. This renouncing is part of the campaign – it’s my sacrifice to meet her and also to make people meet, in some way, Madonna as well.

I made a nice partnership with the biggest Brazilian Fan Club, Estilo Madonna, that is going to change its name to MadonnaGo. We have made a promotion in which the fans who like the page of my campaign and their page on Facebook can be able to participate of a sweepstake of a a wrist watch that I got as gift with my Early Entry ticket to MDNA in London 😦 To participate, you should be resident in Brazil.

If you don’t live in Brazil, don’t worry. I gave to the administrator of Madonna’s Tattoos Group on Facebook, Adi Bar, 5 Singles/CDs  from my collection to be given away to inked fans. Ask to join the community and wait for her posts!

And if you are not an inked fan, don’t worry as well. I’m still making sweepstakes on my Facebook Page, giving away my beloved CDs/DVDs.

Last week, I’ve spent a lot of money with Post-Office sending CDs and DVDs around the world. See who has won/gotten my memorabilia:

Szabrina has gotten a MDNA bag and Hard Candy Towel!

Szabrina Sebok from Hungary has gotten my MDNA Bag plus a Hard Candy Towel! This girl was one of the first ones to give me support 🙂 I gave those items without sweepstake because she deserves it 🙂

Also from Hungary, Rebeka Müller won a sweepstake made through my Facebook page and has gotten my beloved Something to Remember CD 😦 Look what she wrote me:

“I think what you have done is amazing. You give us inspiration. I really wish you that your dream come true because you work a lot for it and you deserve it. Your videos are amazing, full of spirit and you show us to never give up hope. Thank you“. Rebeka has also sent me a pic of her gift.

Rebeka is from Budapest and won my Something to Remember CD

Justin M.Walker-Daniels lives in Missouri, United States and has gotten my Die Another Day Maxi-Single. He made a nice Confessions montage of our pictures and sent it to me. 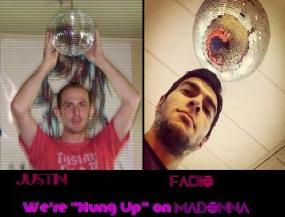 Justin got my Die Another Day Maxi-Single

During the European leg of MDNA Tour, I’ve met a special guy from Czech Republic who will be part of my Die Another Day/Beautiful Killer Video: Jiří Kala. As “payment”, I asked him which CD he didn’t have it yet. He answered me American Life…So I still had it and sent it to him. Look what he wrote me when got his gift:

“My dear Fabio.. just got your package from AMSTERDAM with the DVD´s and omg.. I really cannot believe that from Switzerland… 2 months… you remember what CD I don´t have.. you´re just an amazing guy.. with my mother we saw many of your videos and I have to say hallo “to that beautiful young guy”! 🙂 lovely greetings from the Czech republic!!!You´re the light Fabio… my fingers are crossed for your dream… I´ve intuition.. your plan will be successful!”

Jiří is my friend from Czech Republic who will be part of my Die Another Day Video. He got American Life CD.

Melinda Bonnevier from Sweden has won a sweepstake of a MDNA Bag with a Maxi-Single of Music and a DVD. Her words motivate me to go on with my campaign:

Melinda from Sweden got a MDNA package!

“You managed to put the first smile on my face today (She said after watching my version for Dear Jessie). Thanks! After winning my sweepstake she wrote me: ‘If you work really hard then your dreams come true’, Madonna said. I’ve never seen anyone put so much work into reaching his goal to meet Madonna as Fabio does, and I’ve been a devoted Madonna fan for almost 30 years. His videos has made me laugh and cry, they are full of love, spirituality and hope. I’m really impressed that he’s found such a creative way to spread his message to everyone who’s watching them. Nothing fails. No more fears. And Fabio you will meet Madonna. I think you two have a lot in common. Love and hugs/ Melinda, Sweden”

Finally, back to United States, Kenny Free has won my Love Profusion Maxi- Single and has sent me really nice words of support:

Kenny from United States has won my Love Profusion Maxi-Single

“‘Dreams come true’ was the underlying theme for Madonna’s Virgin Tour and well, basically, her entire career. She has continually strived for the success of realizing her own dreams. She has worked harder and pushed farther than any other artists out there. If that’s not inspiring to you, then you would have to examine your own ambition.

Cut to the present where I, a 30yr fan of this woman, am attaining my dream of seeing her live. I’ve wanted nothing more than to see her in the flesh. It is now a “dream come true” as I will be seeing her MDNA World Tour in a matter of days. I am beyond excited!

I have also met many friends along this fanatic journey as well. They too share similar dreams of seeing her live. It’d be safe to assume my friend, Fabio Viana’s dreams were ‘one in a million’ as we all love Madonna and want nothing more than for her to utter our own names aloud as if she knew us personally. Fabio’s dreams are different though. As much as I admire Madonna’s stand-out persona and unparalleled ambition, I can also respect that all of the creative wisdom she contains is contagious. My friend, Fabio, has attained these attributes. Throughout all of Fabio’s videos, one statement stands clear, “I will meet Madonna”. Not that he ‘wishes’, ‘hopes’, or even ‘prays’ but that he ‘will’. Creating a website is a huge undertaking but to develop it further by amassing friends and like-minded individuals to support his dreams and then to push that even farther by incorporating his own creativity into re-making Madonna videos with his own literal translation is well, that is a page directly from Madonna’s memoir on how to get what you want in life.

I’d like to commend Fabio Viana on his website, all of his videos, but most of all, for his unwavering ambition and determination to meet our idol, Madonna. I truly believe he “will” meet Madonna. I’d also like to thank him for the Love Profusion contest to which I was a winner! I am grateful. All of us have the power, “dreams come true”, but they only work if you do! “Don’t just stand there, let’s get to it”. Thank you Fabio Viana, you are a FRIEND of mine and I wish you nothing but the absolute best in the world and you WILL meet Madonna!”

And the Beat Goes On…

Like Loading...
This entry was posted in Support, Sweepstake and tagged Fans, Love, Sacrifice. Bookmark the permalink.

1 Response to I’m giving away everything